Just a quick update for those of you who are following this project.

Not much accomplished, but she is showing progress! 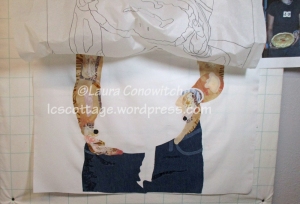 I have decided not to participate in OMG (One Monthly Goal) this month.  I feel a little overwhelmed…so much to do and not enough time.  Which is ridiculous because setting goals with OMG has really helped me to get things done.  It must be the public accountability.  LOL!

In reality, I simply to need to focus…little by little, inch by inch, everything is a cinch.

Will someone come and paint my living room for me?  I just wanna sew!  Ha, ha!

I do have an update on my Candace quilt for you.

As I previously stated, nothing is fused, so if I decide to change something I can easily do so. 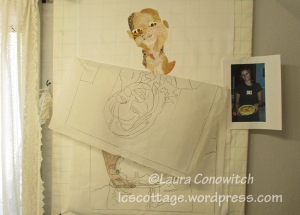 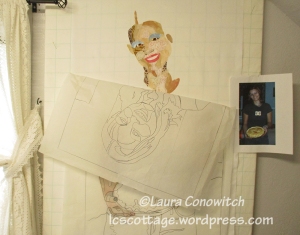 No…that is not a unicorn horn sticking out of her head.  Ha, ha!  Maybe you can guess why that piece is there?

In January of this year, I announced that I was going to make an art quilt using my niece, Candace, as my model.

I made a posterized  and enlarged version of one my favorite photos of a good memory with her.

After that, I did nothing until April, when I made a tracing.

Something about the tracing stopped me cold.  Procrastination really set in.

Sunday, I gave myself a ‘talking to’, and decided to get with it.  While I was tracing my tracing onto Lite Steam A Seam 2 (in reverse so that the resulting pattern pieces would be the right way when I cut them out of fabric), I realized why my tracing bothered me.

It was the way that I traced Candace’s mouth.  The mouth looked like it belonged to a marionette.  At least to me it did.

So I’ve redrawn the mouth on my fusible…not worried about the tracing.  Nobody but me is ever going to use the tracing.

The lesson here is that, it is my quilt.  I can change it anywhere in the building process that I want to.

You can do the same with your quilts.  I give you permission.

I have a muslin foundation on the design board.  It is overlaid with my tracing of the enlarged and posterized photograph.  I also have the photograph pinned on the board (obviously, not the enlarged one).

The tracing is valuable to help me position the batik pieces (the fabric doesn’t have to be batik, but I really like them). 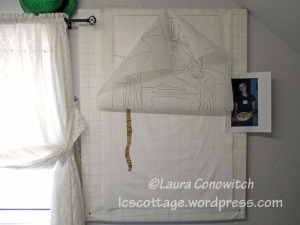 The fabric is not fused down!

That is the wonderful thing about Lite Steam A Seam 2!  It is tacky enough to stay put, but yet, be repositionable! 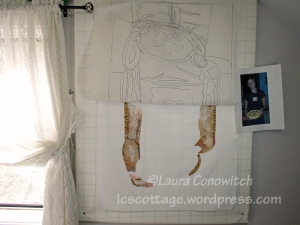 Throughout this entire design process, I won’t actually fuse anything until I am positive that the pieces are just where I want them!

Hopefully, I will make more progress in a reasonable amount of time, but I make no promises!

Lest you think I spent all that time on the coast and never saw the beach, here are a very few photos of beach time.

Hubby and I went with our daughter and her fam.  It was late afternoon, and we were looking direct into the sun.  The sun was extremely bright, but the beach was also extremely cold and windy!

*Clicking on a photo will give you a closer look. 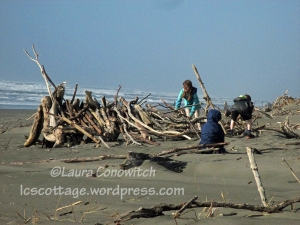 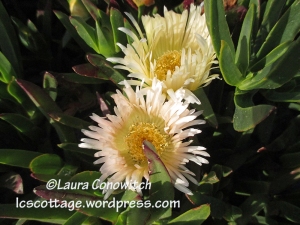 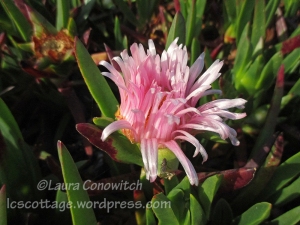 Truth be known, by this time I had a sore throat, and didn’t particularly care to get the settings right on my little power shot camera to take photos.

But it was fun to watch the grandchildren play, and I am always mesmerized by the ocean!

Organizing the Blog and the Candace Project

I have not posted in a while, so thought that perhaps I should check in.

My blog is essentially a journal for me, and it has become difficult to find relevant posts when I want to reference, or reminisce a particular past post.

I have deleted a few posts.I have added new tabs to the header, and I have links to relevant posts listed under those tabs.  I don’t know about you, but I think this will work better for me.

And that may be all that matters. 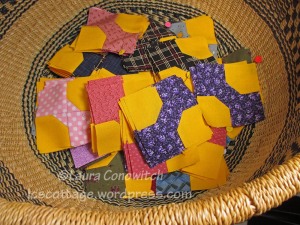 The bow ties are pinned in groups of ten, so they will be easy to count when I decide that I have enough for whatever size quilt that I haven’t made a decision upon yet.

I have begun a new project.  There will be no deadline; no rush on this one.  It may take a very long time.

The enlarged photo is a posterized version of my niece, Candace:

I haven’t done an ‘art quilt’ in a long time, and this one has been on my heart for several years.

Candace was visiting and wanted to learn to bake a pie.  She was thrilled with her first made-from-scratch cherry pie.  A happy memory, and a good one to replicate in an ‘art quilt’!