The Magnolia Bud quilt block is a sweet spring block.

Set side-by-side in a straight set, it looks like this:

Soft and sweet.  Except that my eye is focused on that green, and if I were to make this, I’d try a softer green.

Let’s see how the design looks if some of the blocks are rotated: 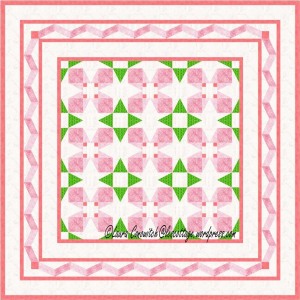 I like that better (and I would still change the green to a more muted green).

What if bolder color is added?

What do the Magnolia Bud blocks look like when separated by sashing and cornerstones?

What if the center square of the quilt block was replaced with a four patch, and alternated with the original block?

Keep playing the ‘What If’ game!  You’ll come up with a winner that you will enjoy creating!  There is no right or wrong…create what makes you happy!

Last week, I introduced the Barrister’s Block in straight settings.

This week, let’s look at the Barrister’s Block on point.

I tried to create more interest by simply rotating the blocks:

I do like it better. What do you think?

I found another version of the Barrister’s Block in BlockBase.  It is #1364.

So I tried it, along with a plain block, in the last on point setting.

I like the lacy look of it.  This design could be very elegant with some beautiful quilting in the negative areas.

Let’s take a look at the Barrister’s Block.

I drew the block from an 8 x 8 grid using Electric Quilt.  If you have BlockBase, it is number 1363.

Here is how it looks set side-by-side in a straight set: 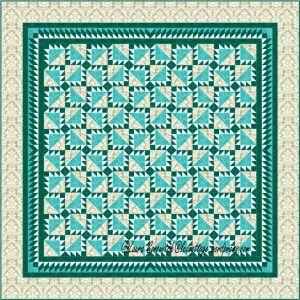 There is a lot of movement created by this block.  It can be calmed down by simply moving the color around.

In the next design, every other block has been rotated.  And I’ve altered the Barrister’s Block just a little bit. 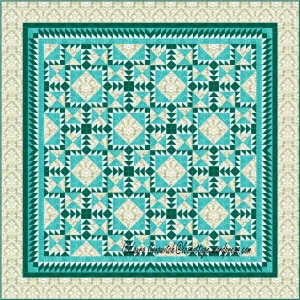 Again…the same setting, but the color has been moved around.  That change shifted the emphasis from the smaller triangles to the large half square triangles.  It looks boxy.

If you haven’t met the quilt block called Balance, then let me introduce you.

I found this block in Nancy Martin’s Perpetual Calendar 365 Quilt Blocks A Year.

It isn’t often that one sees a green and white quilt (I don’t think I’ve ever seen one…I may have to google that later), but it is March, and I’m longing for spring, so I’ve set this block with green and white.

Here is how it looks in a straight set: 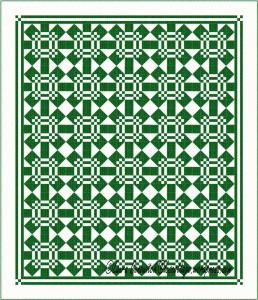 In the following design, I’ve deleted a few lines from the block to create an alternate crossing block to set Balance with.  I’ve also added another green to the mix.

I squared up the quilt design (it isn’t longer than it is wide now) and rearranged the blocks:

Again, Balance is set side-by-side.  The only difference is in the color placement.  Stars have appeared!

By deleting just a few lines, I’ve created another alternate block to add to the mix:

And one more arrangement:

Lots more could be done with this block, so go ahead and play with it!  See what you come up with!

By the way, this block looks amazingly like Bachelor’s Puzzle.

I’ve been playing with the Anvil Quilt Block.

If you have BlockBase, it is #2645, but it is not difficult to draw, and is good practice.

Here is what the Anvil quilt block looks like set side by side in a straight set: 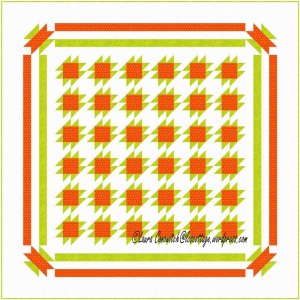 Still side by side in a straight set, but the colors have been changed up.  Some of the blocks are rotated as well: 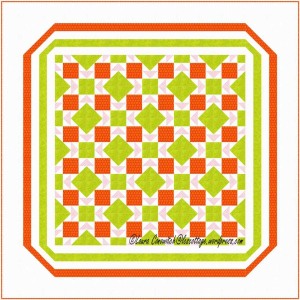 Still using only the Anvil block, the next design looks like arrows:

Adding sashing strips does make the quilt larger (a popular technique), but I don’t find it very exciting:

I have added a plain block, and a variation drawn from the Anvil quilt block, to the next design.  I find this a lot more interesting: 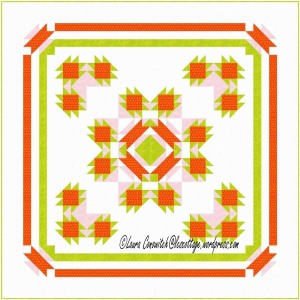 We’ll see what playing with the Anvil quilt block on point turns up next week.