Since I wasn’t happy with the pattern that I used previously, I tried another tutorial for making face masks.

I am much happier! 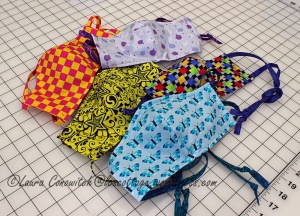 I like Julie’s (The Crafty Quilter) tutorial.  It is well written, has options, and I can leave it on the screen (once loaded) without internet access.  I am rural, so internet access isn’t always available.  Therefore, I limit video time, such as You Tube.

I choose to use a different fabric for the reverse side.  This allows the wearer to know which side he/she has been wearing towards the face.

I also choose to stitch the ties down instead of threading them through the casing.  I think it is easier to use them.

So I heard that my son, and fam, do not have face masks.  They live across the state from me, and the coronavirus has been particularly active near them.

So I have stopped my current projects in order to fill a need for them.

I altered the pattern that I am using, since it did not call for a separate fabric for the inside.  I think it is necessary to tell the two sides apart, therefore I used a t-shirt fabric that I had in my stash.  I also made my ties as opposed to using elastic.

I didn’t really like the pattern that I used, so I won’t share it.  There are plenty of tutorials available via the internet, so I know that you can find one just right for you if you want to make cloth masks.

I will be looking for a different pattern to make my next set of face masks.

I hope that your families are all well and stay that way in this difficult time!

I have not made a lot of progress in the quilting department.

My internet provider has generously given some free gigabytes.

And Bluprint is offering free classes.

So between work (I am an essential employee) and free class binges, I don’t have a lot of time left to sew.

However, I do have an update on Traffic Jam number two.  I have sewn the main part of the quilt together.

Now onto the borders.

Traffic Jam One – It’s A Flimsy!

Traffic Jam One – It’s A Flimsy!

It is a bit overcast today, and a good time to show you the progress on Traffic Jam One. 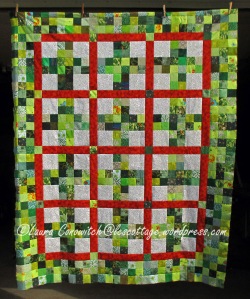 It has been a flimsy for a few days now, but work and a couple of sunny afternoons prevented me from taking photos.

I had a bit of trouble finishing up this flimsy.  Call it ‘airhead moments’, ‘senioritis’, or just a lack of concentration.

I thought that I had miscalculated and did not have enough cut green squares.

So I cut and cut and sewed my borders.

And my borders were too long.

Here is what is leftover:

I will find a purpose for the parts eventually.

Of course, that defeats the original purpose of using up all of those scraps… in this quilt… in the first place.

Looks a bit like a stained glass window from the back: 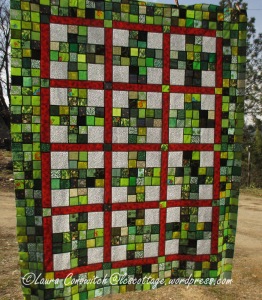 What was I doing on the sunny afternoons after work?

Why, pruning and raking, and making discoveries in the garden, of course!

Here are just a few of my discoveries: 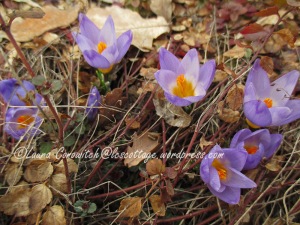 Lots of daffodils (and larkspur)! 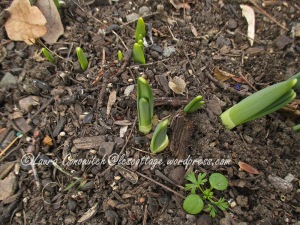 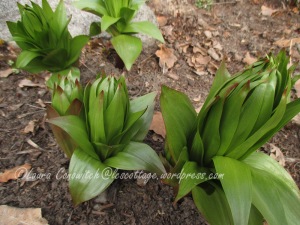 Lots of budding shrubs, including this elderberry!

“It is spring again. The earth is like a child that knows poems by heart.” — Rainer Maria Rilke

I have now pieced and sashed lots of four patches together.

I still need to work on the border before I can call this one a flimsy.

Here is a close up:

I am calling it Traffic Jam One because I intend on making two of these.  Pat’s pattern is a good one for using up those scraps!

It wasn’t planned this way, but it just so happens that I am working on a green project today!

Lots and lots of green four patches are in the making!

I am making Pat Sloan’s Traffic Jam pattern, and using up my green scraps.  Anything green goes!

May the road rise up to meet you.
May the wind always be at your back.
May the sun shine warm upon your face,
and rains fall soft upon your fields.
And until we meet again,
May God hold you in the palm of His hand.

May good luck be with you Wherever you go, and your blessings outnumber the shamrocks that grow.

May your days be many and your troubles be few, May all God’s blessings descend upon you, May peace be within you, May your heart be strong, May you find what you’re seeking wherever you roam.

My version of the Floral Reflections pattern now has borders and has become a flimsy!

I am so happy to have another very old UFO make it to this stage!

My corner squares are not crooked; it is simply the way the flimsy is hanging that makes them look as if they are not straight.

I do, however, have points cut off from the nine patches in the borders.  Oops!

But they are consistent, and I am okay with that!

For better photos, and more about this pattern, click here.